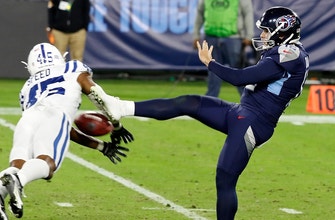 After trailing in the first half of the game, the Indianapolis Colts capitalized on the Tennessee Titans special teams’ mishaps. E.J. Speed blocked Trevor Daniel’s punt, which was recovered by Colts’ cornerback T.J. Carrie. The Colts’ DB took it in for the score, as his team topped the Titans, 34-17.