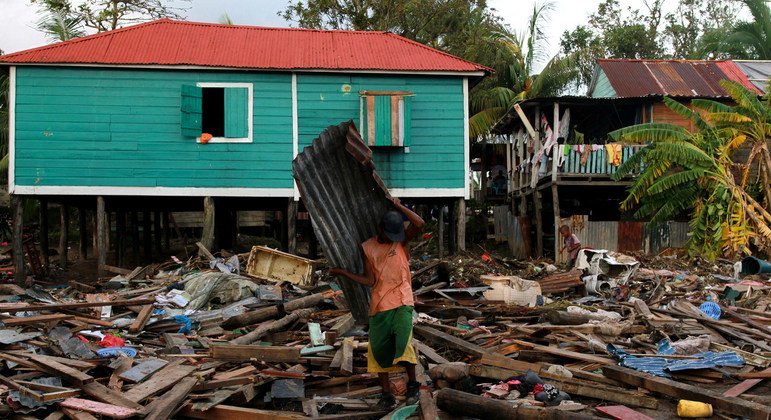 “We’re running out of superlatives for this Atlantic hurricane season. It’s record breaking in every sense of the word. We are currently, with Iota, on the 30th named tropical storm”, Clare Nullis, spokesperson for the World Meteorological Organization, told a regular UN news briefing in Geneva.

“Iota made landfall less than two weeks after Hurricane Eta, which was also a very strong category four hurricane, made landfall just 25 kilometres apart. So we’re having these huge impacts hitting basically the same area. Nicaragua, Honduras, other parts of Central America have not recovered from Hurricane Eta, and now they’re being slammed by this new terrific powerful hurricane”, Ms. Nullis said.

Jens Laerke, spokesperson for the U.N. Office for the Coordination of Humanitarian Affairs, said aid workers in Central America were still discovering the extent of damage from Eta and were now preparing to deal with a second potentially catastrophic impact.

“Iota, with its strong winds and very heavy rainfall, can cause life-threatening flash flooding, river flooding and landslides, not least because the soil is already saturated by Eta.”

Estimates of damage from Eta were still going up as officials and local authorities gradually got access to the most affected areas, Mr. Laerke said.

“So, for example, Honduras, authorities now report that 3 million people are affected. That’s 1 million more than the figures that they reported last week. In Guatemala, we are talking about more than 900,000 people directly affected by Eta. That’s nearly triple the figure from the previous weeks. So this is very much still developing emergency on top of which now slams another emergency with potentially catastrophic consequences.”

Matthew Cochrane, spokesperson for the International Federation of the Red Cross and Red Crescent Societies (IFRC), said the main concern was the risk of landslides, heavy flooding and wind damage. The Red Cross had been involved in helicopter evacuations before the storm hit and it had rescue boats in Honduras ready to launch rescue operations once it had passed, he said.

Iota had already brushed past northern Colombia and the Red Cross there was in the early stages of a recovery operation to help 50,000 families affected by the storm, Mr. Cochrane said.

But a 20 million Swiss franc emergency appeal to support people affected by Hurricane Eta had so far had an extremely slow response from donors, he added.

World Food Programme spokesperson Tomson Phiri said humanitarian agencies had done what they could to prepare, but the hurricane season had turned out to be even worse than expected, starting early and going on longer.

“For example, continued flooding in countries like Guatemala, Honduras, and Nicaragua, is going to affect the incoming harvest, and this will severely strain subsistence farmers and already, whilst it’s still early days, it is quite clear that this will extend the emergency even into mid-2021”, Mr Phiri said.

Ms. Nullis said that at this time of year hurricane season should be winding down, but instead there was a very tragic late surge.

“Iota is the strongest storm in the hurricane season so far to make landfall.”